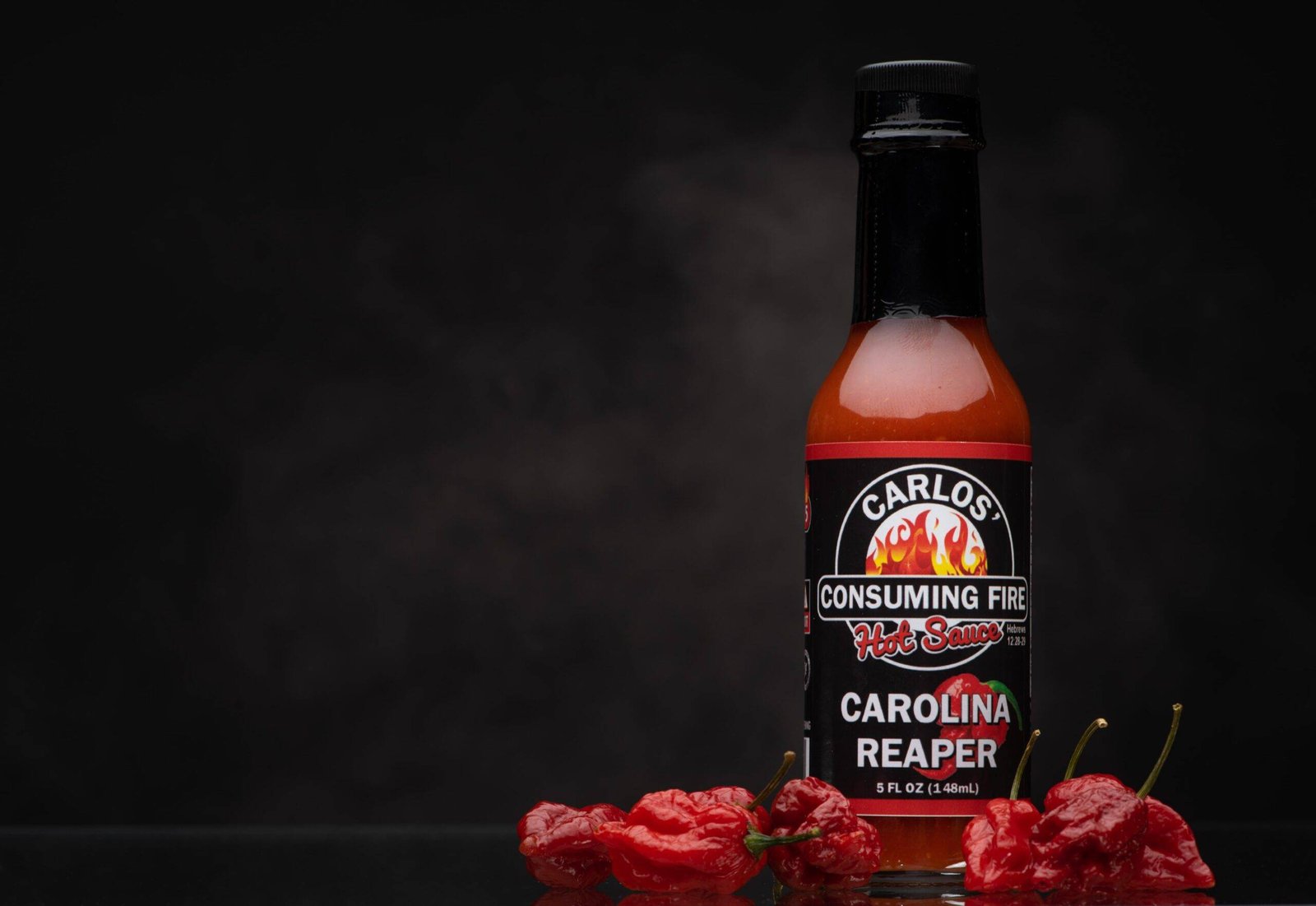 Rating:   5.00
Rated 5.00 out of 5 based on 1 customer rating
(1 customer review)
Carlos’ Consuming Fire Carolina Reaper hot sauce is insanity in a bottle! Ranked number 1, this world-renown hybrid pepper is The King of heat! This obscenely hot yet fruity conquistador always leaves its mark. This delicious pepper is the inspiration behind Carlos’ Consuming Fire Hot Sauce. Satisfaction at last! The name alone will make ones knees buckle… DISCOVER MORE

Carlos’ Consuming Fire Carolina Reaper hot sauce is insanity in a bottle! Ranked number 1, this world-renown hybrid pepper is The King of heat! This obscenely hot yet fruity conquistador always leaves its mark. This delicious pepper is the inspiration behind Carlos’ Consuming Fire Hot Sauce. Satisfaction at last! The name alone will make ones knees buckle… DISCOVER MORE
Rating:   5.00

Stand down Trinidadian Moruga Scorpion, there’s a new hottest pepper in the world in town according to the Guinness Book of World Records. The Carolina Reaper kicks super-hot peppers into another stratosphere.

This is an extremely hot chili pepper developed by a grower named Ed Currie, and is currently the hottest pepper in the world. It is also called HP22B pepper. As of 2013 it was over 7 generations old. Ed created this chili pepper plant variety by crossing a Pakistani Naga (Ghost Pepper) with a Red Habanero type from St Vincents Island in the West Indies. It was bred in South Carolina and tested at over 2.2 Million Scoville Heat Units (with an aveerage of 1,641,000 SHU) by Winthrop University.

This “thing” called the Carolina Reaper (AKA HP22B) is better described as the demon pepper child that was invented by man. There is nothing normal about this pepper because it was bred for heat and that it is. Oddly enough this pepper has excellent flavor as well.

In fact, at its extreme, the Carolina Reaper is hotter than typical pepper spray. That’s insanity in edible form.
Despite the extremely scorching heat of this super hot pepper, the Carolina Reaper is surprisingly fruity and sweet. It is outstanding as a dried powder for adding both heat and flavor, and also as a sauce or hot sauce.

Yes, spicy heat hits the spot in the South, but those potent potions might be doing us more good than we realized. Research suggests that there are health benefits to chile consumption. From their capsaicinoids, to be more specific, which are the fiery compounds inside hot peppers that give them their oomph, from a hint to a wallop. Paradoxically, capsaicinoids are tasteless, so when we say that a chile pepper tastes hot, what we really mean is that it is irritating and aggravating our mouth, lips, eyes, and all the tender things from stem to stern.

Heat threshold and sensitivity varies from person to person, so although there is little consensus on how hot is hot, we can get an objective estimate by looking at a chile’s Scoville score. A Scoville is a unit of measurement named for Wilbur Scoville, inventor of the test that measures these things. A mild chile, such as an Anaheim, is around 500 units, while the fierce chiles can clock in around 500,000 units. The aforementioned Carolina Reaper clocks in at a staggering 2.2 million SHUs. Shew boy.

The good news is that we don’t have to duel with something as wicked as a Carolina Reaper to still reap benefits. Researchers are working on linking hot peppers to pain management and to the treatment of Type 2 diabetes, cardiovascular disease, inflammation, weight loss and cancer. Here’s some of what they’ve found so far, but keep in mind that you should always seek guidance and corroboration from a medical professional.
Health benefits notwithstanding, eating hot chile peppers brings joy to some of us. Embracing the burn makes us feel robust, burly, and indomitable. That’s bound to do us some good. No matter what hot sauce brings to the table, we’re going to keep bringing it to the table.

Carlos’ Consuming Fire Carolina Reaper hot sauce is insanity in a bottle! Ranked number 1, this world-renown hybrid pepper is The King of heat! This obscenely hot yet fruity conquistador always leaves its mark. This delicious pepper is the inspiration behind Carlos’ Consuming Fire Hot Sauce. Satisfaction at last! The name alone will make one’s knees buckle. Why not add some flavorful ingredients and allow this magnificent creation to be enjoyed by all? From hardcore enthusiasts of Hot Peppers to amateur palates that want to try, this exceptionally balanced hot sauce delivers both flavor and dragon’s fire! Sweating profusely, smoke coming from ears, tongue on fire, are simply side effects worth enduring for this hot sauce that can be paired with anything eggs, pork, red meat, poultry, seafood, and much more! You might start with one drop but be sure it will not be your last! If you are looking to enhance the flavor of any dish, simply shake, open, tilt, pour and enjoy! 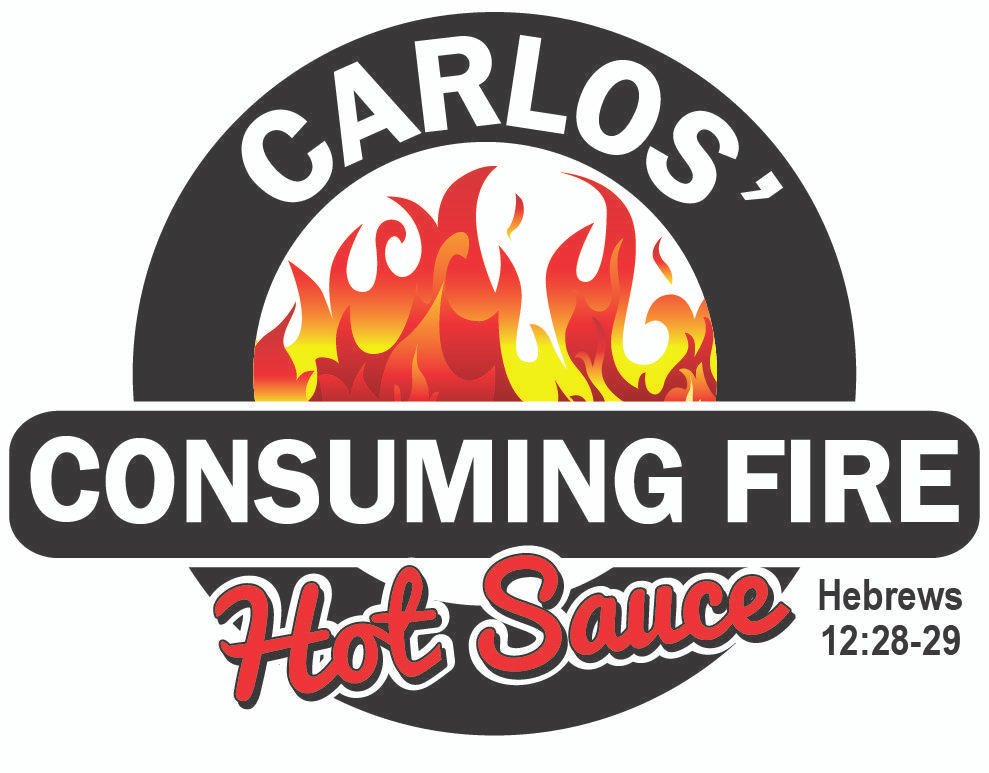